The Marvels did what no other NNL team could do this year by toppling their northern sisters, the Northern Comets, 64-56 in the Grand Final at The Trusts Arena in Auckland on Sunday.

It took until the fourth stanza before the Marvels were able to open a match-winning lead in what had been a mammoth arm-wrestle between the top two ranked teams of the 12-week league.

Match MVP, Saviour Tui, said she was delighted to have helped the Marvels to the history-marking win – the ANZ Premiership shooter missing just two of her 56 attempts at goal.

“I’m just really pleased for the girls,” she said after the match.

Marvels coach Ripeka Pirie said her side had the belief in themselves and their processes leading into the final despite having lost to the Comets on two occasions during the regular season.

“We made a promise to each other right from the beginning – that we’re in this together. We were going to keep fighting and pushing to get us in the final. That tightness of the team really brought out the mana and strength of them.”

It was a celebration for the Northern Zone with the two teams making the Grand Final for the first time and they showcased their depth with both coaches using their benches throughout the match.

The Comets made the Marvels pay for some early turnovers as they raced out to a 6-2 advantage with wing attack Nadia Loveday finding her targets in the shooting circle and both Maine-Crystal Maro and Vika Koloto showing few shooting nerves.

At the other end of the court, the Marvels took time to settle their connections up front but had few problems with accuracy when they could get the ball in the hands of Tui.

The Marvels defensive unit worked well together and with Carys Stythe and Dani Gray both picking up turnover ball; the hosts levelled the scores with just under three minutes in the opening spell.

With her side trailing 12-13 at the first break, Marvels coach Ripeka Pirie was the first to turn to her bench as Braxton Te Riini was injected into the match to join Tui in the shooting circle – their combination and shooter-to-shooter play coming to fruition later in the match.

A three-goal run from the Comets early in the second spell was again pulled in by the Marvels as the sides slugged it out goal-for-goal late in the quarter.

With five minutes to play in the half, Comets shooter Amelia Walmsley was introduced to the final while a major midcourt reshuffle – with Loveday moving to centre, Jaymie Kolose to wing attack and Francesca Tua to wing defence – followed shortly after though it was not enough to break the first half deadlock as the teams returned to the changing rooms with 29 goals each.

The tight tussle continued into the third quarter but a late surge from the hosts was the first real momentum shift as the Marvels clung to a 43-42 lead going into the final 15 minutes.

Two big defensive pick-ups from Stythe and Gray were enough to help the Marvels maintain that momentum with Tui safely slotting the winning goals at the other end of the court. 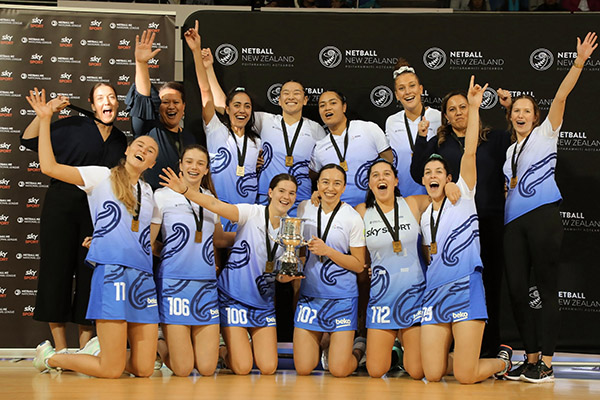